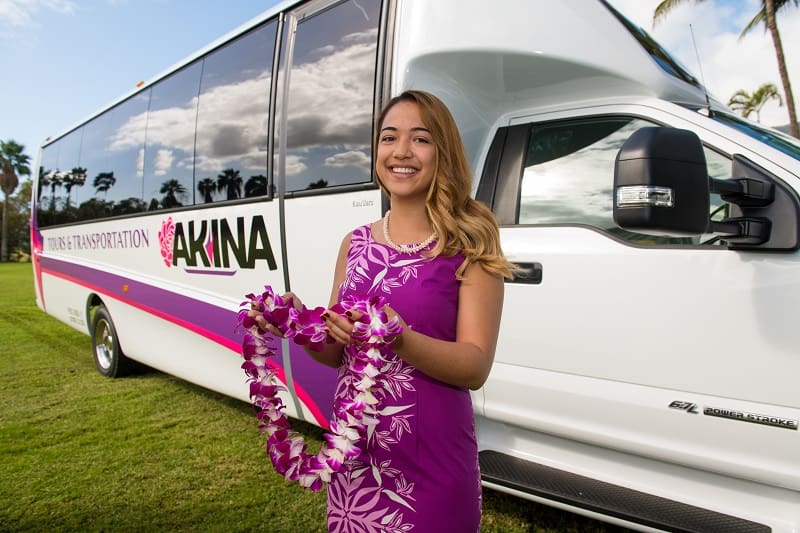 Business Development Manager, Kevin Curry was brought on in January to help launch the new direction. He insisted that the best way to show the world that the Akina company “means business” was to perform a logo “refresh” by updating the look and give focus to what the company is most engaged in: transportation. Since the company was continuing to do what they do best, the key was to perform an image update and not an entire rebrand.

The challenge in working with an established logo, is to update the look while still maintaining the essence of the brand identity – namely the color palette coupled with the instant recognizability of the uniquely bold AKINA typeface that have forever flanked their Van Hool Motorcoaches, first introduced to Maui by Mr. Douglas Akina in the early 1990s. At a mere glance, individuals have associated the pink stemmed rose and purple block letters with the Akina family name for over 30 years. The original artwork was rendered before digital fonts were a mainstay of the graphic world. They were hand rendered, so copying them exactly would be impossible.

Award winning graphic designer and family friend Scott Johnson of Dogtowne Design was called in to see what could be done. Scott’s “first out” rendering delivered via computer screenshot, incorporated a single purple triangle between the letter ‘K’ and the letter ‘I’ to show movement and a ‘sail’ effect. Cassie took one look at the icon and suggested we draw a line under it because it looked like a sail. 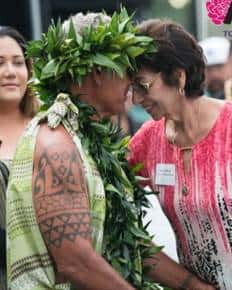 “As it took its shape,” she remembers, “I recalled what the canoe represented– the pride we have in our past.  It also represents the common elements of the vast ocean and the means of crossing it, and the courage and attitude needed to survive.  The voyage into the past is also a voyage into our present-day lives.”   Suddenly it became obvious that the timeless representation of transportation by a Hawaiian-owned-and-operated company was, to be certain, a canoe!

The third color in the scheme was eliminated by nixing the green of the rose stem. It was agreed the stem could go, but the rose was here to stay. It was absolutely part of the brand and company identity. It was at the insistence of Mrs. Sandra Akina, matriarch of the company since the passing of her husband Mr. Douglas Akina in 2012, that Maui’s official flower, the pink Damask Rose be used in the original logo way back when.

Scott’s design brilliance was to update the line of the rose and tuck it behind the letter ‘A’ in such a way that it peeks out, almost reminiscent of sunrise over Haleakala, or how a flower would be parked behind a Hawaiian ear. The pink Damask Rose continues to play a key role in the symbolism; respecting and honoring the traditions set forth by our ancestors. Carefully, the pink color was augmented a bit to a brighter millennial-fuchsia and was paired with the original purple.

Finally, the colorful sails ballooned to life when Scott of Dogtowne Design set them into motion, splashing them across the flank of Akina Tours & Transportation’s two new vehicles. Ford F550 27 passenger Mini-Coaches which were placed into service in February and blessed in a Hawaiian ceremony on February 15th, 2018. The huge splash of color across the “back of the bus” adds balance and vibrance to an already sleek and beautiful profile. In time, the new look will grace all of the Akina fleet of Vans and Motorcoaches. 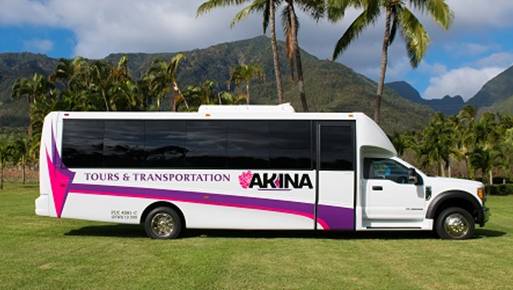 Evidence of this design success is that one look at our logo and you instantly recognize that it still speaks to the Akina company, only in a newer, timeless language with the color and clean lines of the new millennium. 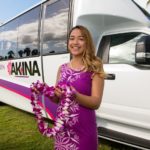